Rene Amesz Reveals his Recipe for Topping the Beatport Charts

René Amesz is a veteran producer who is known worldwide for his unique productions. The Dutchman’s tracks, with their signature groove, have spent plenty of time at the top of the Beatport charts, and he’s collaborated on and remixed tracks with some of the biggest names in the game.

On top of that, Rene’s latest Loopmasters pack, Raw House Vol 1, has just dropped. Featuring sounds lifted directly from his unfinished tracks, this pack provides a true taste of his gritty sound. But where does Amesz get samples for his own tracks from? And how do they all go into making his unique tunes?

“I use a lot of hip hop drums. I always layer a lot of samples – the claps are often eight sounds layered on top of each other!”

Where did you source sounds for your own sample pack?

I have tons of beats and basslines that I’ve programmed but haven't used for any tracks. What I did was bounce a lot of beats and chop them up so I can use them as loops and samples.

I spend eight or nine hours per day in my studio, so I have so many beats and basslines that it was very easy for me to to extract all the sounds. 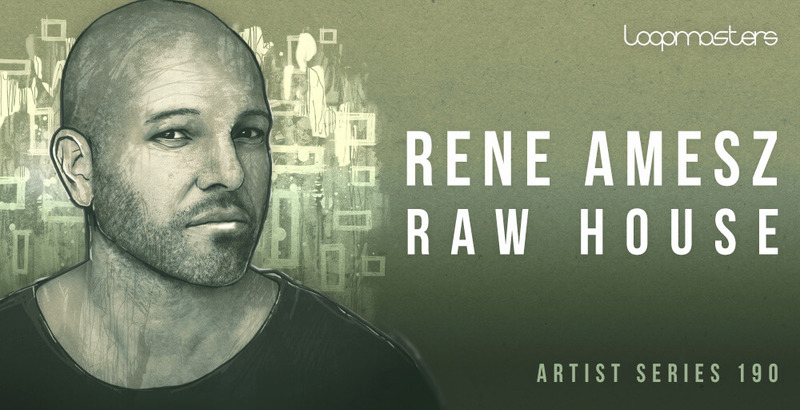 That's a lot of time to spend in the studio making music every week. How do you avoid getting burnt out?

I can't avoid that. I've recently had problems with writer's block – that put me in a depression a couple of months ago, but I just kept on going to the studio. Maybe that's a dumb thing to do. Making beats and a bassline is not a problem for me, but making a tune special enough to release… that's a different thing.

I can't avoid writer's block – nobody can. But on the other hand, I have tons of beats because I just keep on going.

Do you find deadlines help you or hinder you?

I avoid deadlines. They don’t help me. Sometimes I have a remix to do with a deadline, but I always make sure I have four or five weeks before the it’s due because it doesn't help me. Maybe it does for others, but not me.

I can't avoid writer's block – nobody can. But on the other hand, I have tons of beats because I just keep on going.

How do you keep yourself inspired?

I listen to a lot of different styles of music. From Prince, to Lenny Kravitz, to NWA as well as some of the artists who are ruling the Beatport charts right now.

So who are your favourite hip hop artists?

I would say NWA, and I'm a very big fan of Neptunes and Timberland. Timberland has these really raw, gritty sounding beats. If you listen to the beats in my music, it always has a similar vibe to Hip Hop. That's where I get my inspiration from, the raw, acoustic sounding hip hop.

When you're listening to current stuff in the Beatport charts, are there any artists in particular who’ve caught your imagination?

I'm a really big fan of Deep Shakers, they have these really cool, groovy beats. I also love Claude VonStroke and the other artists who are releasing music on Dirty Bird Records.

Do you have any formal musical training?

No, not at all. I've been making music for at least 26 years so I guess you pick things up in that time.

To be honest, I've had some trouble over the last three years to really get a grip on what's going on in the scene, but that's going way better right now. I've got a lot of tracks signed to the biggest labels after years of struggling, and I think that's the way to be played by the big names – to be on the big labels. I was never really a guy who was sending out music to the big DJs.

Right now there's so much competition when it comes to making dance music. Do you have any thoughts on how to stand out from the crowd?

I'm lucky because I've been around for so long that when I send the demo to a label, I have the privilege that I'm always being listened to. For me, it's really hard to go back and imagine what you have to do to get that traction.

You did a remix of Mark Knight and Funkagenda's The Man with the Red Face which of course is a cover of the Laurent Garnier original, a legendary techno tune. What was it like remixing a track like that?

Well, I'm a big Laurent Garnier fan so for me at first it was like well, do I really want to touch this? But on the other hand I'm almost part of the furniture in the Toolroom office. I've been there since the beginning of the label so I'm good friends with Mark and I'm not going to say no to him.

I did two remixes, one was a more tribal kind of track for peak time in the clubs that ended up second or first in the Beatport charts. I made the second remix for iTunes and that was more like the original track.

Any other classic tracks that you'd like to remix?

I've never thought about that. Maybe Crispy Bacon by Laurent Garnier. It's one of my favourites but I don't know if anybody knows that track. Or maybe Eddie Amador's Rise. That would be really cool.

You've collaborated on a track with Mark Knight and Green Velvet, what was it like working with such big names?

That was awesome. Five years ago Mark was here in the studio, we started on the beat and then he flew back to England and it sat on my computer for a year or so. Then Mark came back  to me saying, "Let's finish this man." And so I worked on it more, and we sent it back and forth. Mark added some magic to the track with some effects and climaxes. There was no vocal on it so Mark suggested sending it to Curtis [Green Velvet]. He put his vocals on there and Mark finished and mastered it in England. Awesome!

And what advice do you have for aspiring producers?

One technical thing I recommend is A/B-ing. Buy a track that you really like and put it in your project and listen to how they mixed it, what kind of instruments they used and how the drum sounds are programmed.

What software and hardware do you use to make your tracks?

I'm using Cubase. I've been using Cubase for over 25 years now so I'm not gonna change. I'm not using any synths except for the Moog Minotaur for my basslines and stuff. When I finish a track, I master it with an SPL audio Vitalizer Mk 2 and a tube stereo compressor that's also from SPL. That's all I'm using for my music. It's very simple.

In terms of soft synths, I'm using the Arturia V collection and some synths like Retrologue, Cubase's own synthesiser, which I'm really happy with. Mainly I use samples. Cubase has this built-in sampler function, a sample keyboard, and that's what I use.

Cubase has only had that sampler function for a few years. What did you use for samples before then?

I wasn't using a sample assembler at all, I was just pasting in all the samples as audio. When I wanted to have an LFO trick or sound effects, I’d cut it in the audio editor. That's why my music always sounds a little bit gritty and really raw.

Do you have any favourites in the Arturia V Collection?

Definitely the the the Mini V and I use the Farfisa V for a lot of the acoustic sounds – the old school sounds. The Prophet V is very good for twisting and tweaking electronic sounds as well.

Do you have any audio effects plugins that you use?

Well, I'm using the effect trick sometimes for some stoppages on my master buss. I also use some of Cubase's stock plugins - the brickwall limiters and some of the reverbs. I have the Bionic delay as well which runs through a bridge plugin so it can run in a 32 bit or 64 bit system. The Bionic delay is only for PC but I've been using it for four years and it's a really cool tape delay.