Welcome to Loop+! This is your starting point for finding out how to get the most out of your Loopmasters samples. Browse our selection of tutorials covering a range of topics from popular DAW tips, fundamental studio techniques, basic music theory tutorials, promoting your music, and making the most of your audio plugins. We hope you enjoy!
Loop+ / NEWS & REVIEWS  / Genetix - Interview With Matt Sharp & Rich Dawson

Genetix is the combination of two people, Matt Sharp and Rich Dawson, who started out producing DnB in late 2006 under various alias's and built up a large catalogue of vinyl and digital releases.

They are as happy working with other producers as on their own productions - carving out remixes for artists such as Kelly Clarkson, Timabaland, Drumsound and Bassline Smith and Aquasky, while their deeper productions have also made a big impact with support from Youngsta, J Kenzo, Skream and Benga, N-Type & Walsh amongst many others.

In early 2013 Genetix launched they're own label 'Big Tuna' with the first release entitled '$$$ Ep', which saw support from Skream and Benga on Radio 1 and reached no.7 in the Beatport chart. If that wasn't enough the pair have just completed their first sample pack for Loopmasters entitled 'Forward Thinking Dubstep' which fuses rolling Techno and Dubstep together into a sonic cauldron of production construction tools, speaker ripping basses, and crazy ear candy! We thought it high time to find out what’s cooking in the studio and unlock the mystery behind one of the UKs best production duos intelligent Dubstep sound!

Ok let’s talk about your new sample pack ‘Forward Thinking Dubstep’ out on Loopmasters – what’s the idea behind this pack and how did you approach the process of creating it?

Well firstly we both agreed that the pack should contain some actual bits you would of heard in some of our productions…we think that when you buy a pack from a specific producer you should be getting a good look into how they create that sound. So we've lifted some top loops that we've used regularly that gives our sound that rolling Techno vibe. We also wanted the customer to be able to just throw some loops in and get a good track going quickly so we've included various multi-sample loops as well. To do this we just got a sub groove rolling with a bass synth and a pad, or melody and bounced them into single loops for ease of use. Basically we wanted people to be able to build solid tracks solely from our pack, so we've included all the essentials that are needed to create tracks like our own!

The pack is not the usual array of rinse out bass lines, and pop Dubstep sounds, it's a really well thought out and fresh sounding pack that fuses rolling Techno with Dubstep - is this the way you see the Dubstep landscape moving?

Well in some respects yes…typically of late we've seen the heavy Dubstep sound move away from the limelight with the up rise of trap and deep house but the deeper more underground Dubstep sound has always been present. Those kinda sounds are how Dubstep began and have always been in with the roots of Dubstep. When you listen to sets from some of the pioneers like Youngsta and Distance, you always here elements of Techno in there. In the early days it wasn't so obvious, but nowadays a lot of tracks have a prominent Techno vibe to them, with some even opting for a 4x4 kick drum structure! And if that's not Techno we don't know what is!

How did the project opportunity come about - was this just a natural progression in terms of career workload and your personal production style, or right time, right place?

Well a good friend of ours called Funtcase was remixing for Aquasky, and he pointed them in our direction for they're next remix. We became friends with the guys and after they heard our versatile production style they thought we'd be good for a sample pack, so we were obviously buzzing with the opportunity to work with the legendary Loopmasters as well!

How was the overall production experience?

While at times it was a little tedious with all the bouncing and normalising over all it was a good experience. I think the most fun part was putting the demo together and realising what a great pack (in our opinion) we'd actually made! The bits and pieces flew together effortlessly which we're really proud of. 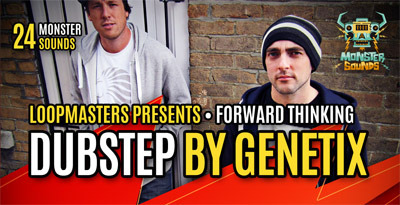 What is your studio setup for production at the moment; are there any stand-out plugins or key bits of gear you use time after time to get a certain sound?

Our studio is pretty bare to be honest. We have a quad core PC, EMU sound card, Novation MIDI keyboard, Tapco S8 monitors and a Yamaha mixing desk. We use Cubase as a sequencer and our main synths are Massive and Malstrom. We also use Omnisphere…that thing is legendary! Our go to plugins are the Lexicon reverbs, Ohm boys delay line, Fab Filter compressor, EQ and Limiter and a wide array of the Waves plugins.

Omnisphere and all the Fab Filter stuff!

How has sampling and the use of samples played a role within your own productions and furthering the development of the overall Dubstep genre for you?

We think samples have a played a huge part in the development of Dubstep. There is such an array of excellent drums out there, and almost anybody can start a track with good punchy drums that need little or no processing. The excellent sample packs available have helped create a wealth of top notch producers. We still love to take old breaks and EQ them up to get them banging, but in this day and age everything is right there for you. If you want to make tracks just by throwing loops together then its available to do - but if you want to delve more deeply the opportunities are endless!

How would you define your production sound at the moment?

It's hard to define as such…we make what we call "tear out" which his our brand of heavy nasty Dubstep. Then theres our deeper Tech sound, which is what this pack is based on…it's best defined as rolling Techno Dubstep, bit of a mouthful lol! We've also been venturing back in DnB, so keep your eyes peeled for that.

Tell us about how you guys got started in the industry?

Well both of us began DJing at young ages. With such a deep interest in music the natural progression was production, so we began producing DnB and moved on to dubstep a few years back. Since then we've started our own label and never looked back. It was our track 'Squid Attack' that launched us into the Dubstep industry, which received massive support, more so than we ever had with our many years in DnB, so we stuck at it...and here we are now.

What’s coming up next for Genetix, apart from changing Dubstep forever…any more sample packs in the pipeline?

Hahaha - we're off on tour in the states in about a month or so, plus we are also going full steam ahead with our label Big Tuna, which at the moment is just a platform for us to release our own productions on. Another sample pack is on the cards, next time focusing on our 'tear out' sound.