Welcome to Loop+! This is your starting point for finding out how to get the most out of your Loopmasters samples. Browse our selection of tutorials covering a range of topics from popular DAW tips, fundamental studio techniques, basic music theory tutorials, promoting your music, and making the most of your audio plugins. We hope you enjoy!
Loop+ / NEWS & REVIEWS  / Interview With K-Tee – Loopmasters Interview With K-Tee 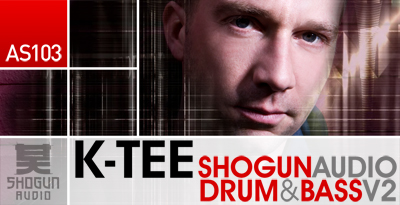 We recently caught up with Shogun Audio boss and long time producer K-Tee, who gave us a few minutes to let us in on some insights into the running of Shogun Audio, new projects and upcoming releases! The Drum And Bass veteran recently released a sample pack with us that was received with a great reception from producers and critics alike, in this interview he also goes over his favourite plug-ins of the moment and what music makes him tick outside of the Drum And Bass genre.

Afternoon K-Tee, I would like to start by saying congratulations on the release of Spectrasoul’s ‘Delay No More’ album that just dropped! Shogun Audio seems to be going from strength to strength! With this in mind how do you go about promoting an album? How far ahead do you start creating awareness for a project such as this?

Afternoon loopmasters! Thanks v much, the Spectrasoul album  has been really well received and we are lucky to be working with such talented producers. The marketing plan for a release like this would start approx 6 – 9 months prior to release and would typically include  singles (in this case 2) before the album release in order to create awareness and a buzz, plus a full range of advertising, PR, remix, launch party, social media, video activity etc all designed to create the maximum impact when the album actually drops.

You recently released the second installment of the ‘Shogun Audio Drum & Bass’ sample pack collection with Loopmasters, how did you get on producing the pack? Did you find it as rewarding as building tracks?

I have to say that it was actually a lot of hours in the studio! Once I got going it was a lot of fun although I think that actually writing / producing tracks is more rewarding as you get to hear the results in club or on radio. Saying that I’m pretty pleased with the pack and think it’s turned out well.

We get a lot of artists say that it enabled them to catalogue their sounds and libraries, Did you find constructing the pack forced a learning curve on your skills as a musician?

Yes absolutely it forced me to get my sample libraries in order and gave me a good excuse to get to know my Virus TI a lot better !

Have you got any solo projects your working on currently?

Due to the constraints of running Shogun Audio, SGN:LTD and our publishing company I find that I have less and less time for production work these days. I’ve got a couple of things in the pipeline with Friction but that’s about it for now.

With Icicle and Spectrasoul releasing tracks of varying genres as of late, are there any more plans for Shogun releasing more Deep House, Dubstep or another genres in the near future?

Yes absolutely. We give our artists quite a lot of creative control so if they want to write house, dubstep or whatever we will support it as long as we feel that it meets the standards. The philosophy for the label is to transition to a forward thinking diverse electronic music label that has it’s roots in dnb. As our artists mature and develop we’ll go on that journey with them, wherever it may take us !

Spectrasoul’s recent album launch showcased a live set from the duo, is this going to be ongoing with the Shogun artists? Can we expect see more of this from Spectrasoul?

Live will become an increasingly important aspect of what our acts do, there is only a certain amount you can do with a DJ set and an album project can provide the perfect  springboard to launch a live show . It’s the classic cycle of write an album, tour the album. It’s something that I can see us doing much more in the future.

Not wishing to pigeon hole, but Shogun Audio was seen by some as a label that released a lot of darker drum and bass, with recent signings like The Prototypes are you deliberately  trying to steer the label out of pigeon holing itself?

It was never a conscious decision to be a ‘deep dnb’ label, it was just the music that our acts were making at the time. Like I said before the aim is just to be an electronic music label that releases quality music across whatever genre. With acts like Friciton and The Prototypes the sound will be more big room dnb whilst acts like Rockwell, Icicle and the others may develop our sound into other areas.

What are your top 5 plug-ins at the moment?

Outside of Drum & Bass, what producer’s / artists are catching your attention? Who has been impressing you as of late?

I have a wide and varied taste in music, currently I’m felling the stuff by machinedrum, the new XX material and disclosure.

Would you like to give us some information about Shogun’s next release? What we can expect and when it will be available?

Next up will be a Rockwell single scheduled for September which we are hoping will do well. Beyond that I cant tell you too much right now except that the end of 2012 and 2013 should be our biggest years yet with big releases from all our acts…. Watch this space !