The sounds of LoFi take many forms in music production. There are vinyl-emulating plugins that can give the impression of a dusty era of turntables and scratchy records; there's tube- and tape-emulating plugins that provide the warmth of classic recording processes and technology, and there are digital techniques that ape the sounds of classic samplers, video game music and the birth of computer music production. It's the final one that we're going to concentrate on here, helping you create chiptune and lo-res sounds that'll put your listeners in mind of a bygone age of early consoles and arcade games.

In FL Studio, there are two tools that can quickly put us in the retro digital mood. Bit Crushing reduces the sample rate and bit depth of your audio signal, emulating the low fidelity of an early digital audio system. This a great way to add some Lo-Fi crunchiness to your tracks, although it can be difficult to control. On the other hand, Dither can help fine-tune the bitcrushing effect to get exactly the sound you want.

We’ll be using the Fruity Squeeze effect in FL Studio and the free mda Dither, which is available from Smartelectronix, but any similar plugins should work in the same way.

Dither is low-level noise added to the audio signal in an effort to keep the level of the audio from dropping below the least significant bit. In other words, it makes the quiet parts of the audio slightly louder so that more of the signal can be heard when the bit depth is reduced. Here is a visual example of this, with a snare drum: 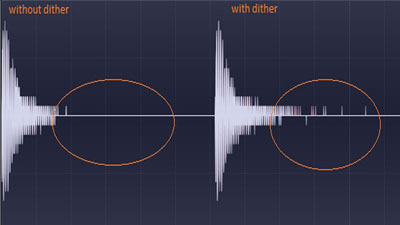 Route the audio you wish to transform to a mixer track, insert a Dither plugin and a Bitcrusher immediately after it. Mute the dither plugin, we’ll come back to it later.

The Fruity Squeeze plugin opens with some default settings that we’ll have to reset. Click the green light next to the Filter label to disable the filter, turn the Amount knob in the bottom left all the way to the right to disable the Puncher effect and drag the Mix slider all the way up. Now we should be left with nothing but the bitcrushing or ‘Squarize’ effect.

Adjust the bitcrushing effect until you get the amount of crunchiness that you want. Don’t worry too much if it causes some silences in the audio (that’s what the dither is for).

Once you have the bitcrusher set, unmute the dither plugin and adjust its settings. More extreme amounts of bitcrushing will need higher levels of dither to make an impact. In the mda Dither plugin, turn the Word Length knob all the way down. This will let you make the dither as loud as possible. Adjust the other three controls to taste. The Dither knob selects between three different kinds of dither, each imparting a different flavor on the audio. Use the Dither Amp control to fine-tune the level of dither and mess around with DC Trim as well. This is going to be largely trial and error.

Fine-tune everything, including the level of the audio going into the mixer track and the wet/dry mix of the bitcrusher, and you’re done!