Welcome to Loop+! This is your starting point for finding out how to get the most out of your Loopmasters samples. Browse our selection of tutorials covering a range of topics from popular DAW tips, fundamental studio techniques, basic music theory tutorials, promoting your music, and making the most of your audio plugins. We hope you enjoy!
Loop+ / NEWS & REVIEWS  / WaveDNA Liquid Rhythm Review At Keys Magazine 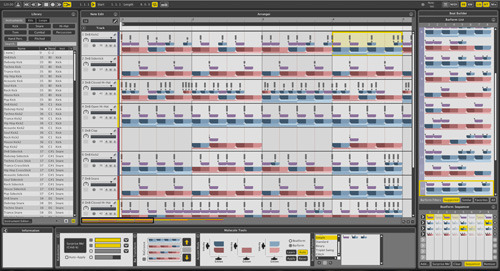 Liquid Rhythm is a MIDI sequencer with a focus on beat programming. The Mac/PC compatible software works in standalone, as a plug-in, or with direct integration in Ableton Live. A goal of the software is to put the meticulous and complex editing of individual MIDI notes aside and to move instead to an efficient and creative workflow by working with beat-long patterns in the foreground. For this, WaveDNA offers a huge library of patterns and percussion instruments which can be altered with the available tools to create impactful, temporal, and stylistic beats.

Back to the Future I

At first glance classical MIDI programming has moved into the background in the last few years due to the advanced possibilities of audio enhancement and the use of audio loops. Sometimes, however an artist may feel it essential to further a composition with the programming of drum and percussion patterns. Here is where Liquid Rhythm takes us to new paths.

The new interface is easily understood and reminiscent, in its two-dimensionality, of Ableton Live. As a user of classical sequencers one gets comfortable immediately. The work area is divided into a central Arranger, a Media Library, the BeatBuilder / BeatSeeker, and the so-called Molecule Tools. A typical sequencer representation has the tracks arranged vertically and forms the main area on which the horizontal timeline allows for further pattern development. In the column on the left is the Media Library with six electronic and four acoustic drum sets in the GM standard, whereby the individual instruments can be varied freely. The right column shows the so-called BeatBuilder or BeatSeeker. In practice one puts on individual tracks for different drum instruments. If one now activates, for instance the Bass drum track, the BeatBuilder shows typical associated patterns, which are inserted by selecting into the track. With the choice of another instrument a suitable selection one bar pattern changes automatically. Finer control lends itself between the categories: Suggested, Similar, Favourites, and the All filter.

With Liquid Rhythm no individual notes are required to be entered. Rather, one thinks and develops beats with musical references. A musical idea using drum arrangements can be completely realized here in no time. Practical in implementation and very well solved! If an undesirable result occurs one can always dive further into the depths. Individual bar patterns can be exchanged or arranged over the BeatForm sequencer. Thus, different combinations of individuals beats can be tried. If it concerns a 4/4 beat, all notes can be varied here within an eighth block. There are no pre-prescribed sequences, therefore one can let ones creativity and intuition run free. Short recapitulation: with Liquid Rhythm one selects one-bar patterns per percussion instrument and varies individual eighth note sequences within these. But this is not the main conclusion – the travel follows us into the microbe realm of the Molecule Tools.

Back to the Future II

To edit a rhythm track efficiently, Accent Modifiers can be selected, which allows quickly and simultaneously all major upbeats (Up and Down Beats) to be changed within a selections in the dynamic, to obtain the dynamic relationships between them. A further enhancement is the Humanize function, which provides for temporal finishes. Here one changes the note position before or behind the back beat in the beat – the rhythm “drags” or “presses forward”. With this direct access not only can you develop well-structured drumbox rhythms terribly fast, these rhythms can also emulate the playing style of genuine musicians. Naturally the possibility also exists to edit individual notes. With the GrooveMover the accents of individual note traces can be redefined very fast individually, or as a multi-selection. For this a pattern with different accent emphasis can be selected. If a variation of basic cuff RNS is to be provided for the B-part of a title, often a shift of the accent in a trace is enough, for example the Snare. Finally the Randomizer makes spontaneous rhythm alterations, for various and connected variations possible with proportional grading. So, for instance one could fill up the drum tracks with random percussion instruments, completely to be surprised and also use the predestined note overlap, in order not to overload the arrangement.

Back to the Future III

With the BeatSeeker Liquid Rhythm has another powerful tool on board, whose representation reminds one of the enormous circle of fifths. In this module a pattern can be selected after style and instrument groups. No sooner said than done: One selects a Hi-Hat figure in the sequencer, whereupon the BeatSeeker automatically shows appropriate similar rhythmic samples, which are exchanged immediately by simply selecting it. The BeatSeeker even considers the stylistic arrangement and shows pattern within the same categories. By improvising efficiently an individual rhythm track with consistent styles can be developed very fast here. Genius!

Liquid Rhythm offers many application possibilities and particularly shines with a high fun factor. It has never been so easy to create, in a few seconds a complete rhythm track, that still sounds interesting and in style. All functions can be remote controlled by MIDI mapping. Thus the application is even suitable for concert performances and for live improvisations. A patch for Keith McMillen’s QuNeo is already ready for use, as well as one for Ableton Push. There is an emphasis on a smooth integration with Max4Live in Ableton Live. Here any working on in either of the two programs are reflected directly, in real time, into the other software. Liquid Rhythm acts as a facilitator for the clip editor in Live: an ideal addition to the fast, efficient, and creative production of rhythms.

Liquid Rhythm shows that a MIDI sequencer in 2013 is by no means “an old hat”. I am actually wondering how I could program MIDI for 30 years without this ingenious application. Liquid Rhythm starts out with a straighforward interface and utilizes music-theoretical competence in working with patterns in a time referenced workflow. Patterns with the finest detail can be developed from scratch within seconds and varied with stylistic elements with confidence – despite the endless possibilities. Thus it makes MIDI programming a joke!