At the bottom of Ableton Live’s device list lies the Utility device. At first glance, the device doesn’t seem to be so useful to users compared to other Ableton Live devices. The truth is that the Utility can perform some very useful tasks, indeed. Let’s have a look at some of them.

The Mute button simply silences the incoming signal when enabled. However, since the Utility can be placed anywhere in a signal chain, it’s mute function can be used to cut the input of a delay line or reverb without turning off the output of these devices. 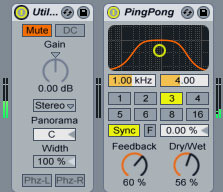 A Utility device with Mute activated, placed before a Ping Pong delay device.

The DC switch filters out DC offsets and extremely low frequencies that are far below the audible range. It will only have a sonic effect if a signal contains these frequencies and is  processed after Utility with nonlinear effects such as compressors or waveshapers.

The Channel Mode chooser allows selective processing of the left and right channels of a sample. If, for example, Left is selected, the right channel is ignored and the left channel  appears on both outputs. This is especially useful if you have a stereo file that contains different information on both channels and you want to use only one. Channels can also be swapped by selecting the Swap channel mode.

The Panorama chooser pans the signal anywhere in the stereo field and acts as a panning control.

The Width control acts as a continuous mono to stereo controller when set from 0 to 100 percent. Values beyond 100 percent emphasize the stereo or “out of phaze” components of a signal and at 200 percent the output contains only the difference between the left and right channels. If either Left or Right have been chosen in the Channel Mode Chooser, the Width control has no function and is therefore disabled.

Finally, there are the Phz-L and Phz-R switches at the bottom of the device. These two switches invert the left, right or both channels of an audio signal. They can be used to fix the incorrect polarities of microphones or to create stereo special effects.