How To Use Parallel Processing In FL Studio

Parallel processing is a mixing technique where you duplicate an audio track, add processing (such as compression) to the duplicated audio track, leaving the original signal non-processed (dry), mix them together and send them to the master out.

This technique is particulary useful with drum compression, as with it you can apply heavy compression to the duplicated drums while retaining the original dynamics of the non-processed version.  Both signals – compressed and non-compressed – are then sent to the master out. This is a great trick to make your drums sound huge.

This tutorial will show you how to set up parallel compression (also known as New York compression) in FL Studio.

Pick a set of drum samples – kick drum, snare, closed hihat and open hihat – and drop them to the step sequencer sampler channels and assign each drum sample to an empty mixer track. Create a simple drum sequence and use the mixer to set the volume levels between the drums in balance: 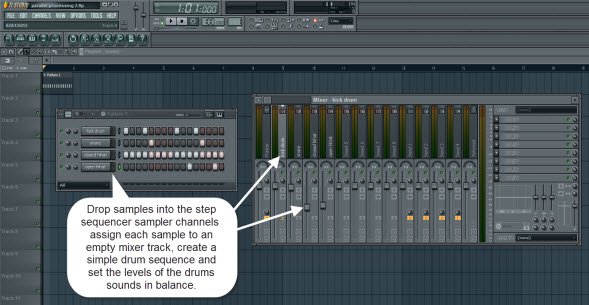 What we are doing here is sending the signal of each drum mixer track to a master track THROUGH one (or more) mixer  track(s). As we chose ‘Route to this track only’, the signal will not be sent straight to the master track – ONLY through the chosen mixer track. This allows us to apply processing (such as compression) to the drums as a GROUP so that it affects all the drum sounds together. However, we can still control the volume levels, apply processing, eq, etc. to each individual drum mixer track.

Ok. So now we have routed the drum tracks to two separate mixer tracks. Rename them ‘Drums Wet’ ‘Drums Dry’. Into the ‘Drums Wet’ track we are going to add the compression and ‘Drums Dry’ track we leave dry.

But we are not done yet with the routing. We are going to need one more empty mixer track – let’s rename it to ‘Semi Master’. We are going to send the signals from ‘Drums Wet’ and ‘Drums Dry’ mixer tracks to the master out through this empty mixer track. This way we can control the volume levels and apply processing such as eq which will affect the whole group of drum signals via one mixer track. This will simplify the task to mix the drums with other instruments as we don’t have to adjust the settings track-by-track.

So, route the ‘Drums Wet’ ‘Drums Dry’ mixer tracks to a empty mixer track (this time using right click choosing ‘Route to this track only’).

It might be a good idea to color the mixer tracks just to keep things organized as with all this routing, etc. you may start to get confused which track is sending what to where - especially when you start to add more stuff to the mixer tracks. So simply just click on a mixer track, press F2 and click on that little square box (on the right side in that rename box) and choose the color. 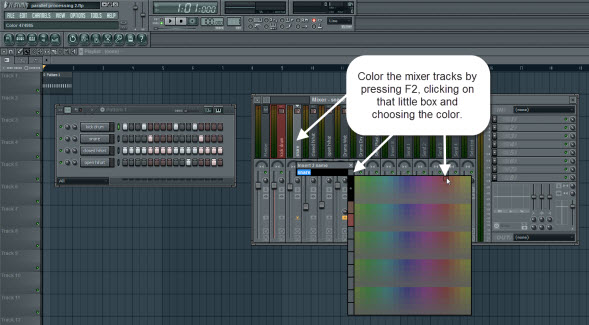 You might also add a Fruity Limiter to the ‘Drums Wet’ mixer track just to increase the volume level -  as the above mentioned Rough Rider settings brings the volume levels down. 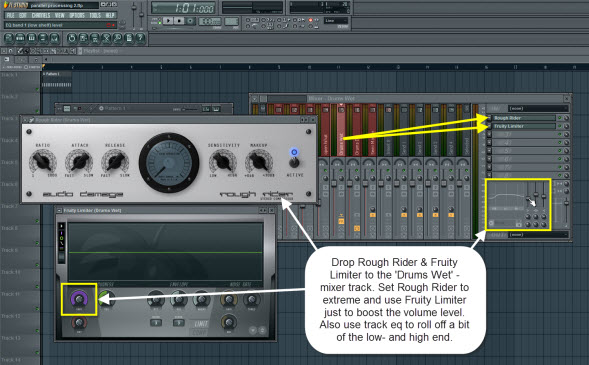 Add  A Compressor To The Drums Wet Mixer Track

Now here’s something very important so pay attention: plugin processing delay. When we add a plugin to a mixer track, it will cause a minor delay that puts the audio on its mixer track out of sync with other mixer tracks. So if we have two identical audio signals on two separate mixer tracks (like in this tutorial example) and we drop a plugin to either one of the tracks, plugin processing delay will cause an unwanted effect called phasing.  We don’t wan’t that to happen here as it makes the drums sound bad.

There IS an automatic plugin delay compensation (PDC) feature in FL Studio, but it doesn't always work in a routing situation like this. 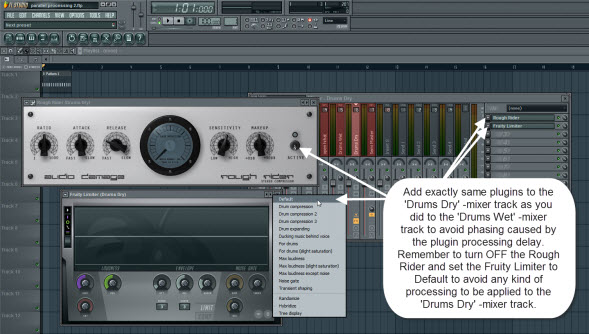 Avoid Phasing By Adding Same Plugins To Both Mixer Tracks 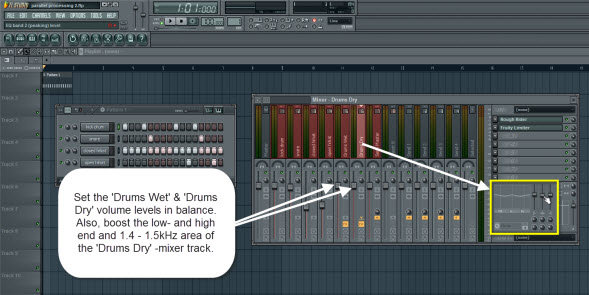 We've also ‘beefed’ up the drums a bit by adding a Soundgoodizer to the ‘Semi Master’ -track.

Now, create a few more drum patterns with a bit of variation to the groove and listen the end results:

So what we did here is use routing to send a drum signal to separate mixer tracks, added a heavy compression to one while leaving the other dry, mixed them together and sent them to a master track through a third different mixer track with Soundgoodizer.

Sounds complicated, but once you get used to it, it’s a piece of cake.