Making Your Bass Sounds Fat and Wide - With Producer Jay-J

How can you get nice, wide stereo bass sounds but still keep that low end fatter than a fois gras goose? Producer Jay-J will tell you a method that'll blow your mid and have your sides splitting…

Many synths (and virtual Instruments) utilize stereo effects, such as chorus or stereo delays and reverbs, to create really wide stereo sounds or patches. These patches sound great when you are auditioning them, but not realistic, in my opinion, when it comes time to fit things into the mix. To create bass sounds with a wide, spread out sound while retaining a tight solid bottom end, I've developed this trick.

Split the bass part to two sets of tracks by duplicating the main bass track. I print my virtual instruments to audio tracks – in this case, it's two stereo audio tracks, but this techniques could work equally well with instrument tracks.

For one of the tracks I put the pan to center on both sides and leave the other hard panned left and right. In Pro Tools there are two pan knobs on a stereo track, but every DAW has the ability to reduce a track's stereo width to 0%, usually using a utility plugin. 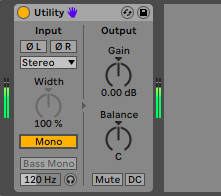 I use a filter on both tracks.  The mono one is for the lowest frequencies so I put a low pass filter on that track with a cutoff at about 130-150Hz and on the other track where I want the wide sound I use a high pass filter and set cutoff frequency at about 170Hz or so. Both are usually a 24dB filter.

This gives me one channel that is mono and contains all the lowest frequencies. I compress that mono track pretty hard so any little volume changes resulting from the stereo effect from the patch will be minimized, leaving a saturated, tight, and contained bottom end. Then I mix in the stereo track to create the width and depth needed

This same approach can also be done with two different bass sounds, layering in one for the bottom frequencies and one to bring the higher, wider, stereo width.