There are some great reasons to heed this advice. But they’re not immediately obvious, especially if you’re unfamiliar or uncomfortable with parametric EQs, and they’re rarely fully explained. I’ll explain and demonstrate below, and you can use the information to improve your EQ adjustments, and in turn your mixes. 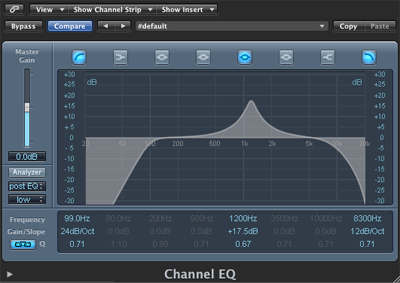 In brief, equalizers alter the tonal quality of audio by applying gain to a specific frequency range. (For something a little less brief, Sound On Sound’s Equalisers Explained is the best EQ primer I’ve read).  Every EQ filter has 3 settings: Frequency, Gain, and Bandwidth.

This is easier to understand as a visual:

The diagram above shows 4 key combinations. From left to right:

Your EQ plugin may not look the same but all parametric equalizers support the same 3 basic options: Frequency, Q, and gain. And using these options, we can “cut narrow, and boost wide.”

But why is it good advice?

In practice, wide EQ cuts remove more signal, and therefore more of a sound’s defining characteristics. Remove too much signal, and the audio you’re treating no longer sounds like itself. This can certainly produce interesting effects, but it won’t yield accurate mixes.

Narrow surgical cuts, on the other hand, remove only specific frequencies, and as such leave the signal largely unchanged. The narrowest cuts can be practically inaudible, as they remove so little from the sound. Often, we use narrow cuts to remove only “problem frequencies,” such as ringing overtones from a drum or boomy resonance from an acoustic guitar, without affecting the overall character of the sound.

It might seem the same should be true of boosting – that narrow boosts are the least audible. But in fact, because of how our ears work, narrow EQ boosts usually sound unnatural and jarring, where wide boosts are much less obvious. (The reasons behind this involve science a little beyond the scope of this article. Summarized: Human brains evolved an innate understanding of the harmonic series, and narrow EQ boosts affect specific harmonics, producing timbres that we sense can’t possibly have occurred naturally).

The effect should be clear in the examples below. These 5 audio files illustrate the various extreme EQ adjustments. First, an untreated track:

The ringing is immediately apparent, and sounds unnatural and distracting (your ears and brain sense, based on the other frequencies, that there shouldn’t be a loud harmonic at that frequency).

While the sound might not be great, the ringing effect introduced above isn’t apparent, because the boost affects so many other frequencies:

The next example illustrates a wide cut at 2060Hz.

Notice how much of the guitar’s character disappears:

Finally, in this example the narrow cut is barely audible at 2060Hz.

All we’ve done is remove the ringing frequency, though since it wasn’t readily apparent in the original sample, its removal is hard to hear.

These examples were contrived to illustrate an effect. (i.e. You’d never actually apply at 14dB boost at 2060Hz to an acoustic guitar track.) However, the principle applies regardless of the audio with which you’re working.  Note, too, that this technique is relevant only to adjustments made with parametric equalizers. Graphic EQs have a fixed bandwidth at each frequency, so “narrow” vs. “wide” cuts aren’t possible.  Finally, and perhaps most importantly, the advice is generally useful but NOT a set-in-stone rule. Sometimes, a ringing effect or hollowed-out sound is exactly what a mix requires. As with everything in audio engineering, let your ears be the final judge of what works best.