You’ve got your instruments, you’ve got your gear, and you’ve even invested in some recording equipment. Yet you find months slipping by with little or nothing recorded. Often the hardest part is just getting started. If you find yourself in this situation, I hope you will benefit from reading a few suggestions that have helped me. 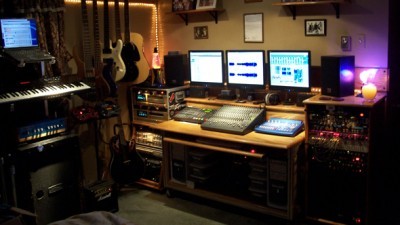 For some of us, our internal filter (the little voice that says “that sucks!”) is on all the time. If you have trouble getting started, then the only appropriate time to edit or filter yourself is at the very end of the creation process (or maybe a week later!). Don’t pressure yourself to make something original or clever! Just start playing some music. If something truly original is going to come out, then it will come out without being forced. But something that just sounds kind of like music is a good start!

If it helps, pretend you’ve been paid just enough money to make some horrible background music for a TV show you hate for a producer who will accept any crap you give him as long as it’s done by tomorrow. Or be like a child finger-painting – what could go wrong? It’s just notes and sounds. Even if you make a few lousy recordings, it’s still a positive. Each recording breaks down a few more mental barriers, makes you more adept at using your recording equipment, makes you more comfortable and less panicky when the “record” button is pressed, and improves you as a musician and producer.

Do you feel stuck because you don’t know what you’re going to play? Does it make you feel uncomfortable to be uninspired? These feelings are common, but can be safely ignored! Waiting for inspiration doesn’t help it to come more often. That’s like waiting for water to come out of a faucet before actually turning it on! First, just start playing something. Ideas might pop out when you’re not looking! And press the “record” button sooner rather than later. Recording minimal, simple parts is fine, and may be preferable in many cases.

3. Make your plans on a dry-erase board, not with a permanent marker.

John Lennon said “Life is what happens to you while you’re busy making other plans.” I think this applies to our music. If the sounds that come out when you start recording are not the sounds you heard in our head… don’t be afraid to go with those surprises. Maybe the track will turn out differently than you’d planned, but at least you made a track! And if you roll with it, it could be an unforeseen kind of cool.

Make a firm promise to yourself to record and save 1-2 minutes of new music every single day – no matter how crappy the music might be. A smooth creative path is created in your brain the same way a well-traveled hiking trail becomes easily passable (while the seldom-used trails are overgrown). Working steadily a little each day like this is guaranteed to make you faster and more comfortable with your recording process. You can save these mini-projects in a “60-Seconds” folder, and each day after recording your minute of new music, if you are still lacking inspiration, dig through that folder to see if there is a past idea you feel like fleshing out. If need be, deprive yourself of something dear until you’ve recorded the 60 seconds. (Your favorite beverage, Facebook, whatever you recorded on TiVo, whatever works!)

Sometimes it’s nice to get another brain or two involved. Lots of ideas can pop out when two or more people start playing and recording together. And if a fellow musician is there with you, perhaps you will be less likely to start wasting time on the internet!

Some of my most productive periods were while writing books about how to use Propellerhead Reason software, because I was exploring each instrument and trying to figure out cool examples to teach. That resulted in many happy accidents. “Whoa, that’s an interesting sound!” And a track is born. That can happen if you are experimenting with your effects pedals too (just ask The Edge!), or even if you are creating technique exercises for yourself on your instrument. If music is one of the great loves of your life, then it’s really worth doing whatever it takes to push through that initial resistance. Sometimes it may feel like it takes as much energy as getting a rocket off the ground, but the further you go, the easier it gets, and before you know it you’ve broken free of the pull that was holding you back.