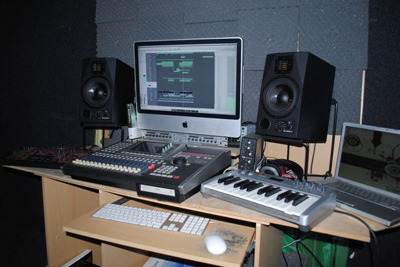 1. The Producer, Not The Gear, Makes The Music

A producer who doesn’t know what he’s doing cannot produce golden sound, even with the best gear on the planet. Give a great producer even just decent gear and he’ll still manage to produce quality results. The point? New gear won’t make you better. Work on your super-ninja production skillz first! Learn how to use the gear you have, learn and use different mic techniques, study the basics of acoustics, computer recording and mixing. Apply this knowledge and refine it as you go along.

2. Crapola In, Crapola Out

You’ve probably heard of the fix-it-in-the-mix mentality by now and you also know you should avoid that line from ever entering your mind. Heaping on the effects or compressing the living life out of a track during the mixing stage won’t give you the fat sound you lust after. A low-level recorded or weak signal will be much closer to your noise-floor. Adding compression to this weak signal during mixing will pull up the noise along with the signal. The same goes for out-of-time-or-out-of-rhythm instrumentalists. Headache to fix in the mix. The point? Always aim to get the best possible signal down while recording. Don’t settle for less-than-great takes unless you’re absolutely pressured to do so.

You learn the most valuable things by watching and talking to other producers. Advancement by osmosis! Manuals and text-books are good maps, though they don’t always show you the actual territory. This is where seeing producers at work can pay huge dividends for your own music production progress. Luckily, you can now also watch producers, even some of the pros, on YouTube and other video sites. Music production forums also give you the opportunity to connect with other producers. The point? Connect with other producers and talk craft. This is always where you’ll get the best music production tips. Watch how others do it and learn faster. Easy.

Computer music production is great, no doubt. Computers and software however like to sometimes crash. It sucks to get a mix just right, crash and then realize the last half-hour of your work has vanished into the abyss where all non-saved work dwells. The point? Develop the save often habit into a compulsion. You may find yourself hitting the save shortcut (Ctrl+S) even while browsing the web! That’s fine. At least your work will be captured.

5. Close Your Eyes To Open Your Ears The visual sense takes priority with most of us which means that while your eyes are open the ears are pushed to second place. The visual aspect of computer-based DAWs makes music production much more of a visual activity, often at the expense of good sound. The point? Close your eyes to make your ears into the top priority sense. Trust your ears when hunting for a good sound. If it sounds good to you, it probably is good.

This one’s simple: You can add all the effects you want in post-production. Removing effects is much harder. The point? Keep your recordings clean on the way in and the mixing stage will offer many more possibilities for creative work. Music Production Tips For Newbie Producers

As an artist you may draw inspiration from chaotic environments. This changes the moment you put on your producer cap. Tidiness, whether it be in your studio, your computer file-system or your DAW session, will allow you to be creative. The point? Keep things tidy so you won’t get overwhelmed or bogged-down with technical issues or searching for files when you want to be creative or productive.

8. Inspiration Comes While You Work

9. Give Me a Break! Your ears and brain need a little R&R or they cross over a threshold where they start to shut out incoming signals. No, I’ve not scientifically verified this. I’m sure the papers must be out there in some academic journal. ;-) The point? Take regular breaks every 15 to 20 minutes to avoid brain-fry and cloth-ears, especially when mixing. This will save your ears, give you more perspective and boost your output. I swearz!

10. The Many Paths To The Grail

A great final mix is all that matters to a good music producer. It’s what you work towards at every step of the music production process. How you get to the holy grail is up to you. The point? Rules are for robots. You’ll develop your own techniques and work-flow. Use what you have to produce an excellent track and it won’t matter how you did it. What matters is only what it sounds like when you press play.

11. The Hump Turns Into A Snowball

You’ll reach stages where you’ll feel stuck and like you’re making no progress. You’ll see other producers make it look easy and doubt your own ability to ever do it well. This is natural. Most producers go through this process. The ones who make it are the ones who ignore their doubts and fears and push on. The point? Persist. You will reach a point where you can produce like a pro. The hump you’re pushing up against will reach a peak and start to go down, causing a snowball of good results. Keep growing, pay your dues and soon you’ll be the one who makes it look easy.