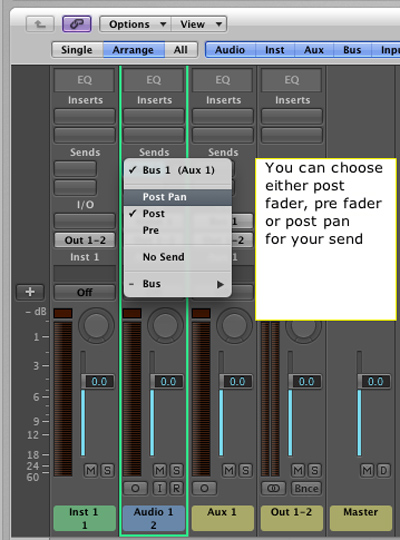 A common question is whether or not to send tracks to an effects send using pre-fader or post-fader -  so let’s try and clear it up a little.

We’re looking at Logic here, but most  DAWs will let you route to an effects send using either pre or post. When an Aux send is configured post-fader, the effect’s wet-to-dry ratio is preserved as you raise and lower  the dry channel fader.  So lowering a channel’s fader simultaneously lowers the Aux send signal level. That keeps you from having to adjust effects return fader levels in the mixer or wet/dry ratios at the effects processor every time you make a level adjustment with a track’s channel fader.

In most cases, you’ll want to keep the balance between a dry track and its effects relatively constant throughout the mixdown process so post-fader effect sends are used more often than pre-fader effect sends.

However, there are some interesting uses for the pre-fader setting, for example creating an effect such as a sound dissapearing into exapansive reverb.  A good example of this is when you hear someone in a film walking and the steps emerge out of a  distant reverberant sound, come more close and present as they “approach” you, and then return to the distant echo as they walk away.  This is done using a blend of the original and effects channels and changing their levels independant of eachother using the PRE setting.

So, in the case of the “footsteps” example mentioned above,  this is acheived by keeping the effect send reverb level constant while you  slowly increse  its dry level (giving the sense that the person is “approaching”) and then returning it to a low level (giving the impression that they are walking away).

Try it yourself with a sound: Select a sound and send it to an effects bus with a reverb on it.  Select PRE for your send.  Now, set the level of reverb you want the sound to have in the mix by turning up its pre-fader Aux send, which is routed to your reverb unit, until the effect sounds right.

Then, slowly lower the sounds’ dry channel fader. As you lower the fader, the sound’s dry level dips while the level of the processed signal remains constant. The result sounds as though the sound is moving away from you: the dry sound gets quieter, leaving just the reverberations of the room. Of course, you simply need to slowly raise the dry channel fader again to give the impression that the sound is “coming back”

Another fun and useful effect to play around with.