Waves CLA Classic Compressors is the result of partnership working between Waves and Chris Lord-Alge. Chris Lord-Alge is a legendary producer whose extensive career has seen him work alongside artists including U2, James Brown, Grandmaster Flash and Green day. This collection of four compressors is modelled on Chris's four personal favourite machines. Waves CLA Compressors bundle is considered a true classic by audio engineers the world over.

This is a model of perhaps the most ubiquitous tube opto-compressor in the engineering world. First introduced in the early 60s, this compressor uses an opto cell as a peak detector and features a unique 2-stage release characteristic. The CLA-2A, modelled after a famous tube opto-compressor. This emulation offers all the same controls as the original, along with the Waves analog control options.

At the time of its introduction, this compressor was well-loved for its very transparent operation, with relatively little harmonic distortion. Of course today, in the digital world, any harmonic distortion is a coveted character flaw, and is far more conspicuous than it once was.

Like the original, the CLA-2A offers a very transparent compression curve (around 3:1), as well as a slow attack time (around 10ms). It offers warmth and even a slightly edgy distortion when driven hard. Of course, the 2A lends itself very well to vocals and other materials where post transient control is desired.

This is a model of a famous solid state opto compressor, first introduced in the early 1970’s. It offers a very simple control set: An input level control, a peak reduction control, a switch that lets you choose between limiting and compression, a metering selector switch, a high frequency control, and the added feature of the Waves analog controls which are detailed in the above description of the CLA-76.

This is very useful for situations in which too much low end information is affecting the way higher frequencies are being compressed, useful when there is lot of lowend-air in vocal that needn’t be filtered out, but affects when and how hard the compressor attacks.

The CLA-3A obviously does not offer a variable attack and release time, and while being relatively quick with an attack time of 1.5ms, does not match the wickedly fast attack of the CLA-76. It offers extremely transparent operation, and is perfect for vocals and instruments like electric guitars. However, my favorite application for this style of compressor has always been drums. It seems to have the perfect inherent attack and release time for them, and when applied, instantly provides you with a nicely emphasized slap as well as a lower mid-range thud that sounds fantastic.

Once again, the CLA-3A offers an excellent emulation of the hardware unit, offering a subtle harmonic distortion and a nice smooth compression. It has often found a place in my recent mixes, tapping the tops of the snare drum. 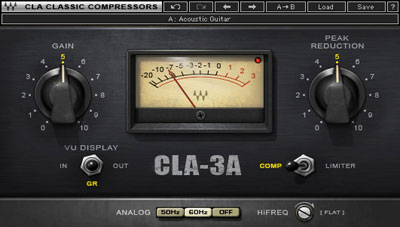 Waves offer two flavours of the same compressor topology in this plug-in: “Bluey,” based on an earlier (blue-stripe revision b) version of the 1176, and “Blackie,” based on the later revision D-LN iteration of the same model. Both are exact models of two of Chris Lord-Alge’s favourite units.

They offer the same familiar interface with input and output levels, variable attack and release times, compression ratio (4:1, 8:1, 12:1, 20:1, ALL), metering preferences, and a compression bypass switch.

The major differences between the two compressors are most easily perceived in levels of distortion and noise. “Bluey” distorts more easily than its counterpart, yet has a lower level of hiss than “Blackie” when the analog section is engaged. Conversely, the 50-60 Hz hum is virtually inaudible in “Blacky.”

I should emphasize that this hum emulation is very subtle in both cases overall, and you certainly would not find it distracting should you choose to leave the analog section engaged. If anything, I found it pleasing as it reminded me of days spent behind an analog console.

Ironically, after so many years working digitally, it seems I now miss the higher noise floor I used to spend so much time trying to diminish. As with their hardware counterparts, these compressors have very fast attack times (slowest setting is 1 ms, fastest up to 50 microseconds) and thus lend themselves well to material in which a more aggressive approach to controlling dynamic range is in order.

Given the aforementioned differences, it is up to the user to decide what works best in a given situation. I have more often found myself attracted to using the Bluey version of the plug simply because of the attitude it imparts.

Inserting this plug on a lead vocal or drum room mics and engaging the “all” button instantly gives an explosive and in-your-face quality that is at once familiar and very exciting, and radical changes to the resulting sound can easily be accomplished with very subtle adjustment of the input level.

On the other hand, you can easily back the ratio and gain off and have a more subtle version of the same thing. Of course, this is what one expects from a compressor, but I was struck at how musical it was, and how many different colours were achievable in quite an overt way. I found Blacky a little more useful in situations where I wanted a lot of control over the sound, but with a little less colouration bass guitar being a good example, where often one wants to employ a healthy amount of compression without adding too much fuzz or loss of low end to the signal.

I often used Blacky on piano and vocals as well, offering an audible compression effect without compromising a clean signal and totally eliminating all dynamics of the source.