Reverb is one of those elusive parts of the producer’s world. The mission: apply a sense of space to the channels in your project, or create cool Reverse Reverb Effects using reverb plugins. Some of the most successful, characterful – and perhaps most importantly, wallet-friendly at $50 each – reverb plugins developed in recent years are made by ValhallaDSP. 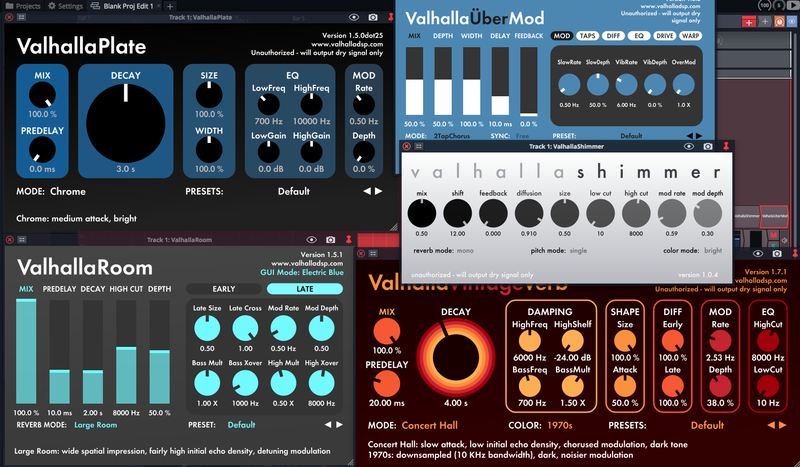 All ValhallaDSP plugins are built as algorithmic reverbs. Instead of setting out to model individual components of reverb hardware, developer Sean Costello took a more artistic route in tuning their processing by ear. The results of this have led to some of the most respected reverbs out there.

In this guide, we’re going to introduce you to all five Valhalla reverb plugins, plus Valhalla’s free FreqEcho processor, and get you started with their basic parameters and sonic possibilities. You can get hold of all the Valhalla gang at the ValhallaDSP website.

Perhaps the most straight-up of all the Valhalla DSP plugins, Valhalla Room gives you a simulation of the reverb response of an actual room. This can be thought of as a studio space, in most cases, but the sound and response can also be pushed into more extreme territory. The plugin’s main mode of operation – the type of reverb it’s producing – is set using the Reverb Mode option, with a choice of room sizes, depths and specific spaces. 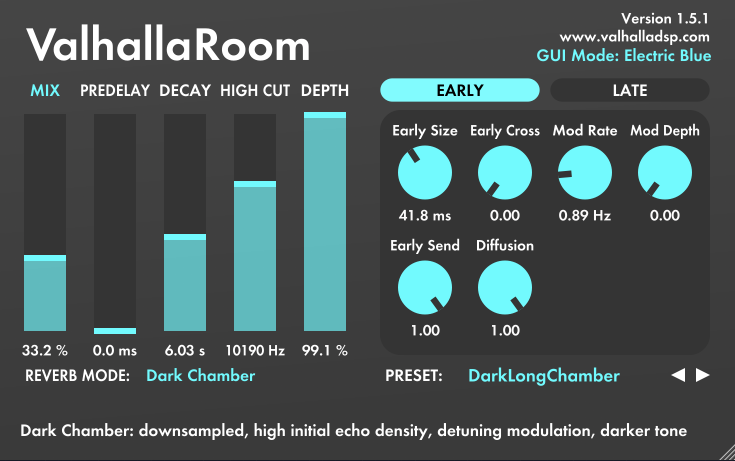 On the left are ValhallaRoom’s global controls: Mix blends the reverbed signal with the original, dry input signal; PreDelay introduces a delay after your original sound and before the actual reverb kicks in; Decay sets the amount of time taken for the reverb to die off; High Cut removes the highest frequencies from the reverb signal. 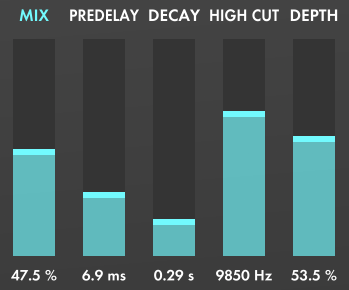 An interesting feature of this room reverb is its different settings for both the reverb’s Early and Late Reflections, and the ability to blend towards one, the other or both, using the Depth control. Late reflections can be tailored as to their size, modulation rate/depth, and their bass response can be specified, whereas early reflections get their own Size dial, modulation controls, and the amount of this stage then sent into the Late Reflections stage can be tweaked.

VintageVerb recalls classic reverb hardware, giving you the sounds of eras past in your mix. VintageVerb’s review scores are high thanks to its analogue-style response and sophisticated sound.

The plugin’s Mix, PreDelay and Decay controls work in the same way as in ValhallaRoom, and its available modes of reverb operation include halls, chambers, plates and more random, unique setups. VintageVerb’s Colour parameter narrows down the era you’re emulating with your reverb setup, with a choice of 1970s, 1980s or ‘Now’. 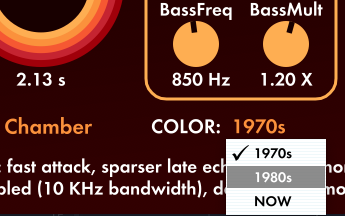 The customisation you can go to with your Vintage Verbs gets quite deep. With the Damping controls, you can damp certain frequency bands so that the bass or high frequencies die down at different rates, and you can change Diffusion parameters for early and late reflections independently.

Perhaps the most intriguing of the Valhalla reverbs described in this round-up, ValhallaShimmer specialises in creating huge, otherworldly, long reverb sounds with a huge density. All parameters can be tweaked smoothly once the reverb has been set in motion, meaning that you can conjure up evolving, complex sounds by tweaking parameters on the fly and using the modulation controls.

Shimmer features pitchshifting through the Shift control, making the reverb signal higher or lower than your original input by up to 12 semitones (one octave). The Feedback control sees the output of the reverb connected back into the input, helping any changes you make take longer to kick in.

With Pitch modes combining Single, Dual and Reverse operation, and Color mode selection between Bright and Dark, ValhallaShimmer has plenty of customisation when you’re creating long and deep reverb beds.

Perhaps the least reverb-esque of all the Valhalla DSP plugins, UberMod styles itself as a multitap delay with lashings of modulation onboard. There are 32 delay taps, with diffusion and distortion for pushing things further. 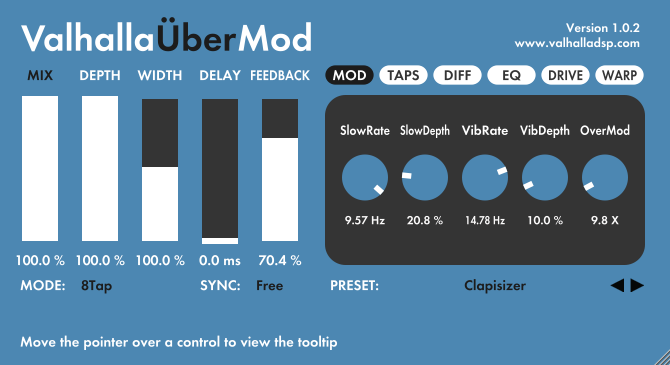 Push up the Delay and Feedback controls to set the base delay time used by UberMod. The Modes of operation include Chorus, Ensembles, Delays of varying tap numbers, and more. Next, head to the six tabs on the right-hand side to gain even more control over the specifics of how all UberMod’s delay lines react to each other and feed delayed signals between each other.

With UberMod, it’s possible to create tape-style feedback delays effects, chorus-style and flange-style modulated effects, reverse reverb sounds and many others besides. By adjusting Modulation parameters, Spread, Slope and Skew of the delay taps, Diffusion Rate and Depth, EQ, distortion and warping, there’s always something unexpected waiting around the corner with UberMod. 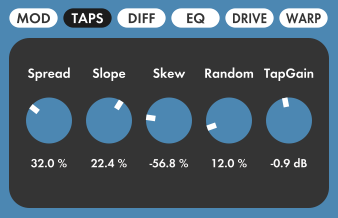 The most recent ValhallaDSP reverb, ValhallaPlate emulates the classic plate reverb effect, where sound was sent to resonate through a huge metal plate. This early studio effect was a staple on vocal recordings, but that doesn’t mean Valhalla’s reverb is only suited to that – try it on drums, synths and anything else to get that haunting, resonant plate sound in your tracks. 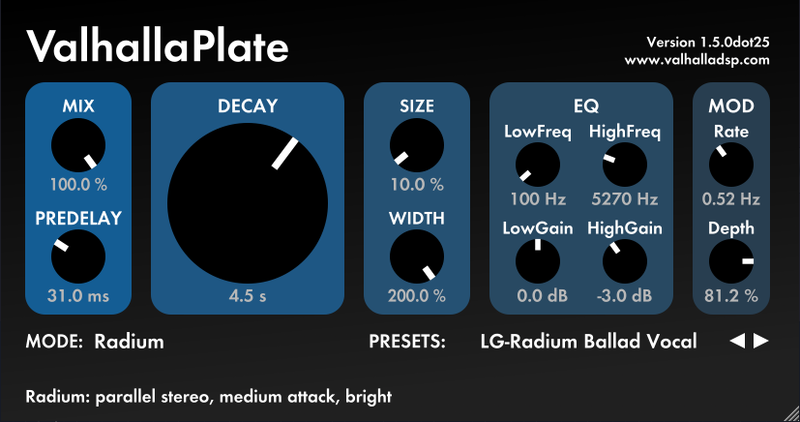 ValhallaPlate’s modes are geared towards the type of metal the simulated plate is composed of, and they include some completely made-up metals among them. You get Size and Width controls to ape the specific plate you want to conjure up, and EQ parameters to affect the signal.

Other than the Modulation Rate and Depth controls, this reverb plugin is a relatively simple entry from ValhallaDSP, but it’s the hard-to-model sound of classic plate reverb hardware that’s at stake in this one.

When you cross a frequency shifter with a delay, you can get some astounding results, feeding the output of the circuit back into the input to create evolving, cascading repeats of your original sound. FreqEcho’s mission is to explore just that, pairing its main Shift control with Delay time, Feedback and Mix controls, for eerie echoes that go on and on. 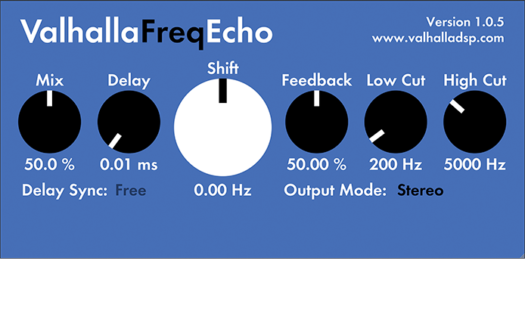 You can limit the effect with high-and low-cut filters, curtailing things to allow a bit more Feedback to be used without completely overpowering the sound. If you’re shifting up, you might want to introduce some high-cut; if you’re shifting down, try low-cut… although you can always throw the rulebook out the window.

The best thing about FreqEcho, though, might just be its price – it’s available for free at the ValhallaDSP website, alongside all the other Valhalla reverb plugins.