How to get Samples in Key with your Track

Music theory isn’t for everyone. For most, it brings back memories either of annoying teachers who you didn’t want to learn from or of pretentious professional musicians who want to blind you with fancy words. There’s a lot of reasons not to like music theory, but at the root of the problem is probably how much effort it takes.

In this guide, we’re going to help you unfold the world of theory in simple terms, helping you to quickly understand how – and why – different samples and any other pieces of music work together, and how you can easily use this knowledge to make better music. Thanks to the browser search and the pitch warping features of our Loopcloud software, you can get up and running and find your own harmony in no time.

What is a Musical Key?

Let’s start off nice and easy. You know that there are 12 notes in music, running from C to B, with both white and black notes in between. In essence, a musical key means that you take a certain collection of those notes and use them for your music, throwing the others away.

Generally, most keys that we talk about in music are made up of seven notes, discarding five. The combination of notes is something we can work out by the name. If one musician or composer says “I’m using F minor”, another musician or composer will know what notes that includes.

What is a Musical Scale?

For this article, we will use ‘key’ and ‘scale’ interchangeably – they both mean the same thing. Strictly speaking, you could say that a musical scale is notes from a certain key played in order (like the notes of C major played from C to C, not just played randomly or in a melody).

C major is very often the first musical key that’s explained – it’s all the white notes of the keyboard, played from C to C. In this case, the seven notes that remain as the scale are all the white ones, and the ones that are got rid of are all the black ones – it’s a simple key to remember.

If you try playing C major, starting from C and ending in the C above, it’s that instantly recognisable western scale that everyone knows. If you don’t have your MIDI keyboard or DAW to hand, hear it here.

The point of using a musical key is that, by just using these seven notes and nothing else, you can have as many instruments as you want, and as long as all are playing notes from the same musical key, they’ll basically all sound good when playing together.

To illustrate multiple instruments playing together in the key of C major, what better piece than Terry Riley’s In C, which makes a point of being minimal. While this is a great example of how multiple instruments work together when they’re in the same key, this might also illustrate to you what’s good about changing key and putting variation into music – it tends to go on for a while!

In Loopcloud, we can search using a particular browser tag to come up with just samples in C major. By going to the Key and BPM tab at the top, you can select your musical note and a major or minor scale. Select C major, as we have below, and you’ll be able to choose from samples that are in that exact key.

In theory, this means that all these samples should fit together to make sweet, harmonious music, but don’t forget the tempo – you’ll only want to put together samples that are close in tempo, so your DAW’s timestretching won’t reduce the samples’ quality.

Let’s look at the key E major, which is marked in the below picture in green. You can see that, unlike the simple C major, which contained only white notes, E major contains four black notes.

It may look different to C major, and it may start on a different note, but the ‘feeling’ of E major is very much similar to C major. That’s the whole point of the ‘Major’ name: each of this musical keys is basically the same key, whether you call it A major, E major, F# major or Db major, the key itself remains the same, although different instruments still won’t sound good playing a mixture of keys – they all have to play the same one to sound good together..

Again, if you don’t have your MIDI keyboard with you, check out how the E major scale sounds here.

How the Major Scale Works Every Time

So as the name of the major scale changes – maybe it’s C major, E major or Gb major – the one thing that remains the same is the feeling. The reason for this consistency is the fact that the gaps in between the notes remain the same. 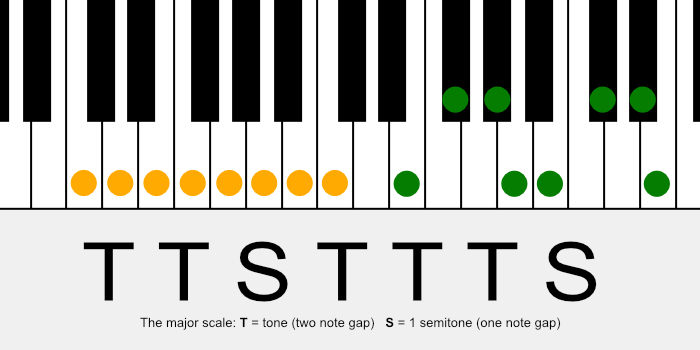 In the image above, you can see that every jump in the major scale (both C major in orange and E major in green) is the same, no matter what major scale you’re in. This pattern of 2-2-1-2-2-2-1, or to put it more officially, T-T-S-T-T-T-S, is the pattern that really defines what a major scale is, and you would experience the exact same pattern, whichever major key you’re using.

Let’s use the similarity of all major scales to our advantage. In Loopcloud, we may have chosen a few samples in C major, meaning that our tune will be in the key of C major, with every instrument playing the same group of seven notes.

Now, if we find a sample we love that’s in the wrong key – let’s say it’s in D major – all we have to do is pitch it down to turn it into a C major sample. In Loopcloud, we can do this using the Pitch control and moving it down to minus 2.

To turn a sample in G major into C major, for example, we would reduce the Pitch control to -7 semitones, or even raise it by +5 semitones.

By using the Auto function, we can set the key we’re using and have every sample pitched into the correct note. It only works with similar keys though – major to major, minor to minor, etc. That’s exactly what we’re going to discuss next.

A minor key is similar in principle to a major key, in that it contains seven notes spaced out through the keyboard, instead of the full available twelve. What really separates the minor from the major scale is its pattern. We can work it out by using all the white notes, playing them from A to A. 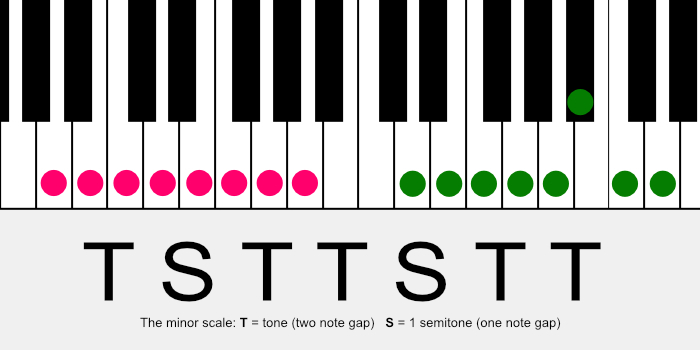 Again, you can fit a minor key with a different minor key by re-pitching the material in your DAW or in Loopcloud. Here, we’re trying to fit a sample in G minor into a track that’s in Bb minor – all we need to do is bring the pitch up three semitones, and we can drag the perfectly tuned, pitchshifted sample out into our DAW instead of the original if we like.

You may have noticed that the patterns of major and minor scales can actually superimpose themselves onto one another. What we mean is that, if you notice that two scales contain exactly the same notes, such as C major and A minor, which both contain all white notes, what’s to stop samples in these keys working well together? As it turns out, not much.

If you try to combine two samples from Loopcloud – one in C major and one in A minor – they can usually exist together quite well. Generally, the ‘focus’ of the C major sample will be on the note C, as you can imagine, and the A minor sample on the note A, but the fact that the two scales share the same notes – just used in a different order – makes for a lot of good musical use.

In the image above, the relative keys of B minor (purple) and D major (red) are shown. These two keys also use the exact same notes of the keyboard, which is easy to see as soon as the two are laid on top of each other. Samples from B minor and D minor will be very likely to work in each others’ keys, which increases the number of samples you have at your disposal when you’re creating tracks.

Using the formula of plus three semitones (minor to major), or minus three semitones (major to minor), you can increase the number of samples you’ve got available to you in Loopcloud. If your song’s in F major, you can also find samples that work in D minor, or even other samples pitched up to match your key.

So with a basic knowledge of how music scales and keys work, you should now be more prepared for working with samples in Loopcloud. With a knowledge of Loopcloud’s filtering and tagging by a sample’s key, and its ability to pitchshift its samples as they’re being auditioned, you can greatly increase the number of elements you can use to create a track.

Naturally, there’s a lot more music theory out there, but a solid grounding in how keys work will see you on your way to becoming a better musician and producer. From here, the next thing to learn to supercharge your productions is how chords work, which will give you a larger supply of triads and extensions to craft progressions from.

Tools like Scaler from Plugin Boutique will help you work with chords and open up possibilities for new progressions and inspiration.